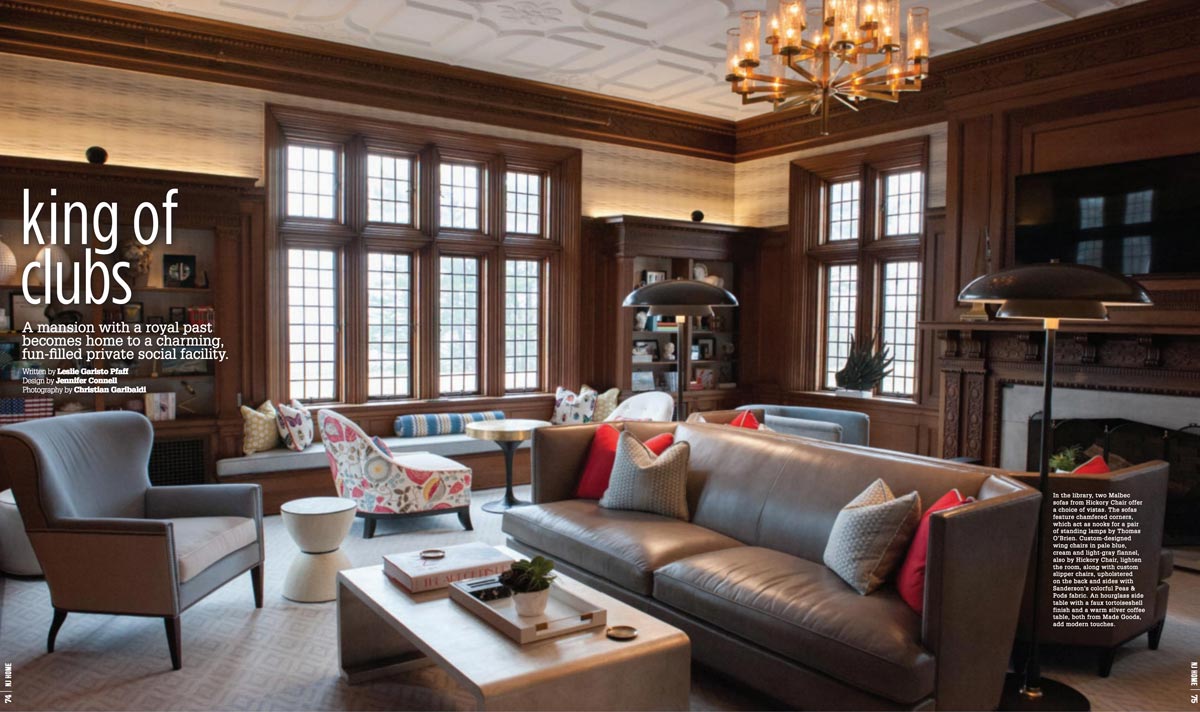 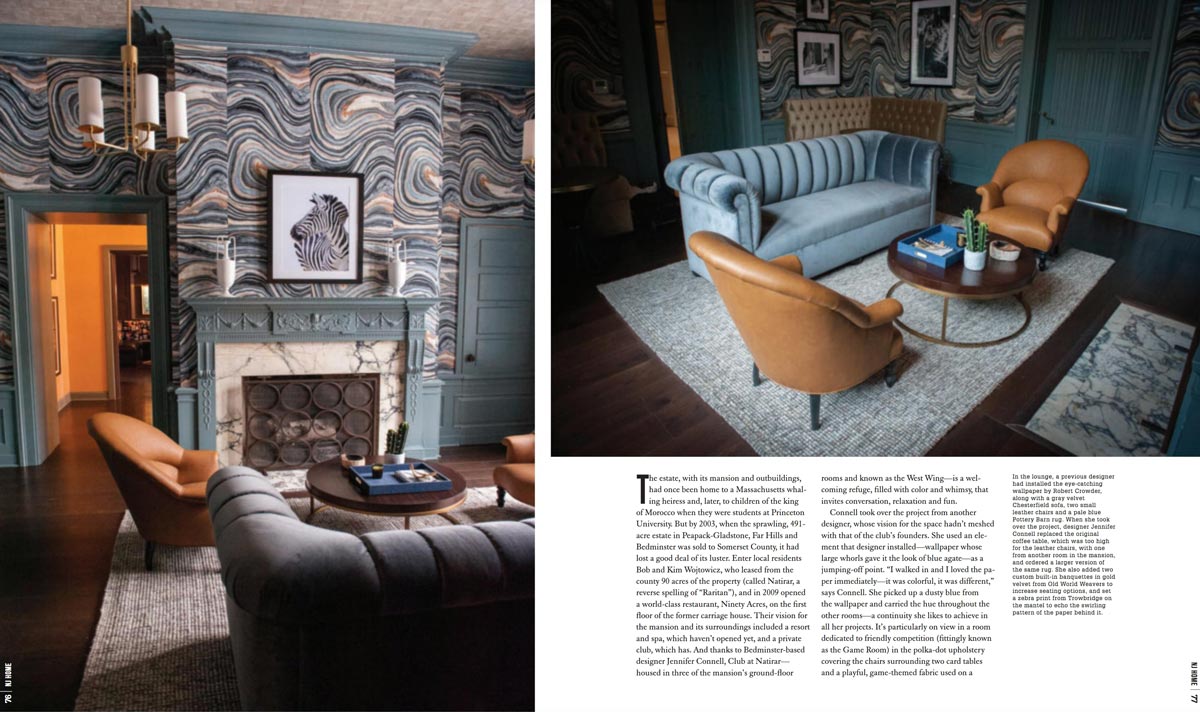 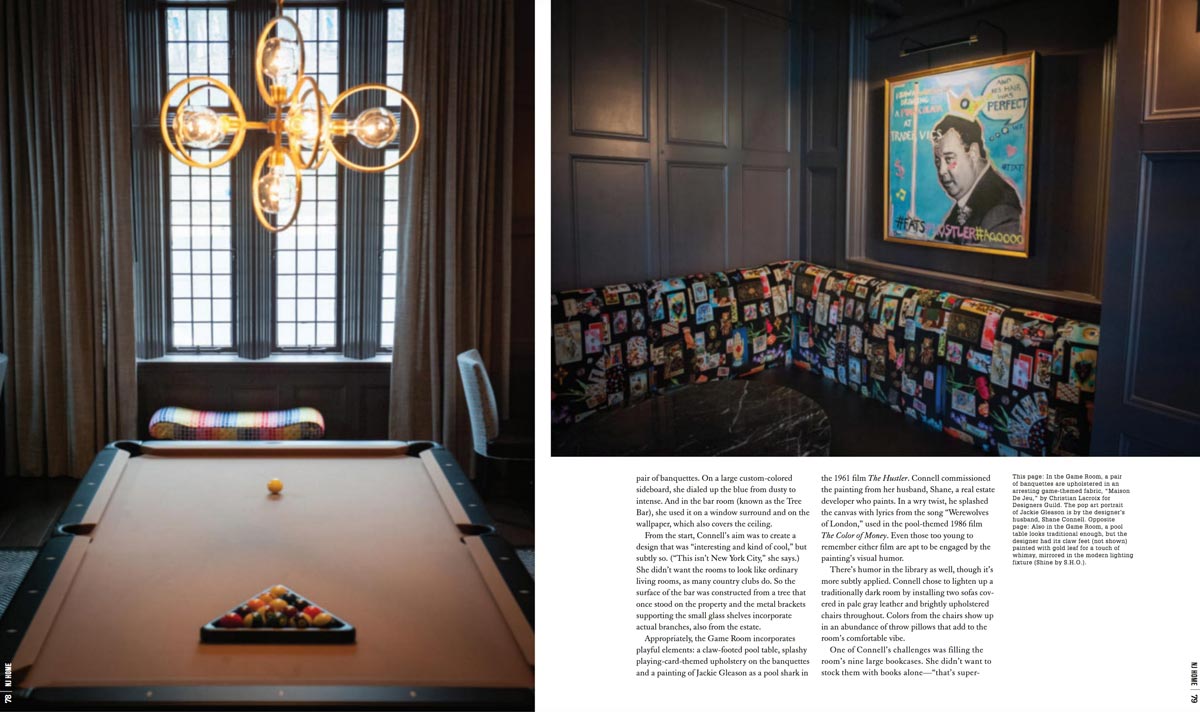 A mansion with a royal past becomes home to a charming, fun-filled private social facility.

The estate, with its mansion and outbuildings, had once been home to a Massachusetts whaling heiress and, later, to children of the king of Morocco when they were students at Princeton University. But by 2003, when the sprawling, 491- acre estate in Peapack-Gladstone, Far Hills and Bedminster was sold to Somerset County, it had lost a good deal of its luster. Enter local residents Bob and Kim Wojtowicz, who leased from the county 90 acres of the property (called Natirar, a reverse spelling of"Raritan"), and in 2009 opened a world-class restaurant, Ninety Acres, on the first floor of the former carriage house. Their vision for the mansion and its surroundings included a resort and spa, which haven't opened yet, and a private club, which has. And thanks to Bedminster-based designer Jennifer Connell, Club at Natirar housed in three of the mansion's ground-floor rooms and known as the West Wing-is a welcoming refuge, filled with color and whimsy, that invites conversation, relaxation and fun.

Connell took over the project from another designer, whose vision for the space hadn't meshed with that of the club's founders. She used an element that the previous designer installed-wallpaper whose large whorls gave it the look of blue agate-as a jumping-off point. "I walked in and I loved the paper immediately-it was colorful, it was different," says Connell. She picked up a dusty blue from the wallpaper and carried the hue throughout the other rooms-a continuity she likes to achieve in all her projects. It's particularly on view in a room dedicated to friendly competition (fittingly known as the Game Room) in the polka-dot upholstery covering the chairs surrounding two card tables and a playful, game-themed fabric used on a pair of banquettes. On a large custom-colored sideboard, she dialed up the blue from dusty to intense. And in the bar room (known as the Tree Bar), she used it on a window surround and on the wallpaper, which also covers the ceiling.

From the start, Connell's aim was to create a design that was "interesting and kind of cool," but subtly so. ("This isn't New York City," she says.) She didn't want the rooms to look like ordinary living rooms, as many country clubs do. So the surface of the bar was constructed from a tree that once stood on the property and the metal brackets supporting the small glass shelves incorporate actual branches, also from the estate.

Appropriately, the Game Room incorporates playful elements: a claw-footed pool table, splashy playing-card-themed upholstery on the banquettes and a painting of Jackie Gleason as a pool shark in the 1961 film The Hustler. Connell commissioned the painting from her husband, Shane, a real estate developer who paints. In a wry twist, he splashed the canvas with lyrics from the song "Werewolves of London," used in the pool-themed 1986 film The Color of Money. Even those too young to remember either film are apt to be engaged by the painting's visual humor.

There's humor in the library as well, though it's more subtly applied. Connell chose to lighten up a traditionally dark room by installing two sofas covered in pale gray leather and brightly upholstered chairs throughout. Colors from the chairs show up in an abundance of throw pillows that add to the room's comfortable vibe.

One of Connell's challenges was filling the room's nine large bookcases. She didn't want to stock them with books alone "that's super-boring," she says. So she spent four months shopping for visually arresting objects. "When you're accessorizing bookshelves," she adds, "you want the eye to flow and not to get stuck looking at one thing." She scoured a combination of local stores such as GreatHouse Bonny Neiman in Summit and CSM Art & Frame in Chatham and accessory companies like Made Goods and Global Views, as well as antique shops and New York City street vendors. Framed travel photographs flow pleasingly into decoupage plates from John Derian, an antique "POWER" label from a vintage car, crystals in varying sizes and shapes, and objects of pure whimsy like a bust of John Lennon, a Magic 8 Ball and an articulated hand. ("People interact with the hand," Connell says. "You never know which finger is going to be pointed up.")

As much as she wanted club members to be amused, she also wanted them to feel comfortable. To that end, she made sure that the elements of her design were as functional as they were beautiful. For the library, Connell drew inspiration from the lobbies of great hotels, which traditionally feature seating that facilitates conversation as well as quiet reflection. The two sofas, for example, are positioned so that one looks out on the room and the other faces the fireplace. And the ottomans scattered throughout can be used as footrests or informal seating. "People like to pull up a stool and have a conversation," says Connell. "They don't want to have to drag a chair everywhere they go." That's one small but essential consideration in a design meant to encourage ease and enjoyment. The Princeton princes would have approved.